If 2020 was the year that time forgot, 2021 is the year we made up for it. We have personal and professional updates galore! We said goodbye to a long-serving family pet and Jake's COVID beard (RIP). We said hello to new family pets and professional opportunities. Just like last year, even the pandemic can't keep us from traveling.

We spent most of 2021 still in a waiting pattern for China to open back up for travel so that we could bring Jesslyn home. However, in November we received word that the little girl we’ve been waiting in limbo for 2 years to adopt is no longer eligible for adoption. We were told that the birth mother was found. At first we consoled ourselves with the thought that being with her birth mother is what’s really best for her.
But we subsequently found out more details that have led us to believe the mother may not in fact actually want her back. It’s against the law to abandon a child in China. Apparently, recent legislation has been passed that has resulted in more stringent enforcement of that law. We’ve been told that the police matched the birth mother through DNA sampling with the express purpose of forcing her to reclaim the child or face punishment.
The letter announcing that she is now ineligible to be adopted was dated July 29, yet we have seen photos of her still at the orphanage as recently as October 1st, over 2 months later. We've written a letter of appeal and sent it both to the China Center of Children's Welfare and Adoption, as well as the group in the US State Department that handles international adoptions. We just want what’s best for our little girl, and it doesn’t seem like forcing her mother to take her back against her will is what’s best for anyone.

Jaedyn has been thriving in-person in her 3rd grade class. She's enjoyed playing soccer on a team with her friends and performed at her first piano recital. She continues to attend Mandarin classes.
Kaleb started Kindergarten this year and lost his first tooth. We're glad that he was put in a class with Jaedyn's former Kindergarten teacher. He also attends Mandarin classes, piano lessons, and has been playing on a soccer team.
With both kids now fully vaccinated against COVID-19, we're looking forward to their lives going back to some semblance of normalcy, with regular play dates and easier travel. 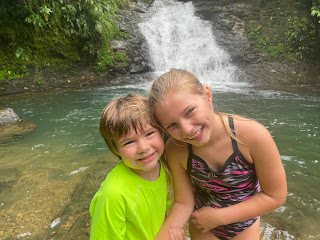 In May we lost Daphne, our beloved black lab. She lived to a ripe old age of 14. We filled the void in July with the arrival of a new black lab puppy, Dahlia. We also adopted Frosty, a Siamese ragdoll kitten and littermate of our niece Bryn's new kitten. 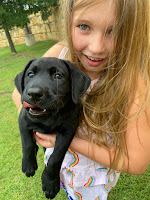 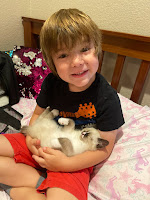 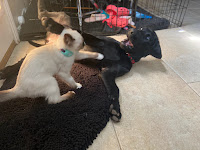 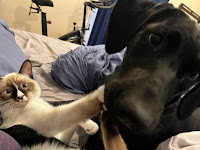 In March we went to Utah with the kids and a group of friends to do a tour of national parks, including Zion, Bryce Canyon, Capitol Reef, Canyonlands, and Arches. Near the end of the school year, we took the kids to Disney World. In June, we headed to Minnesota for a gathering of Jake's family to celebrate his parents' 50th wedding anniversary. The itch to travel to more exotic lands caught up with us in the fall as we traveled to Puerto Rico and Cost Rica in October and November.

Kyla continues to work part-time as a pediatric nurse practitioner at a pediatric clinic. She's had increasing opportunities to put her lactation consultant certification to good use.
Jake is starting a new position in just before the end of the year as Head of Product at membersy, a digital health company that provides Dental Service Organizations (DSOs) with dental membership plans for their patients. He's looking forward to the increased challenge!
Posted by Jake Carlson at 9:58 PM No comments: