"It" finally has a name: Jaedyn Amara. The name means "God always hears," or more literally "God hears eternal." For anyone that has specific questions about how we arrived at the name, etc: this post is for you. This will most likely annoy anyone that is wanting to name their future baby or potential baby without outside influences. If that describes you, you have been warned and do not read further.

Before I get into it, I want to apologize to anyone that I secretly (and sometimes not so secretly) judged for giving their kid a pretty normal name with a nonstandard spelling. What I've learned from this process is that most popular names have been adapted to numerous phonetic systems from various regions, resulting in a whole lot of totally legit spelling variations. I've therefore come to the conclusion that most "ridiculous" spellings are probably just due to parents trying to incorporate their heritage's spelling of an otherwise standard name. I understand now, and I'm sorry.

We formally started the process of naming the baby on our recent trip to Minnesota to see my (Jake's) family for Christmas. I was against even talking about it much until we had more time and less distractions, and our trip fit the bill. We were both done with school for the semester, and I was even without my laptop for the duration (gasp). We had flights and quiet evenings alone to ponder and debate.

I wasn't really interested in just waiting for it to come to us or any other such hippy dippy nonsense. No, the decision had to be researched, systematic, and comprehensive. The most contentious of the decisions was to use a theme or not to use a theme. I am not flexible on this. I have not been rigid as to what theme we chose, but I insisted that there be a theme. One kid can't have a Greek first name the other Swedish, one kid can't have a middle name that's an adjective and the other a noun, and so on. OCD, maybe. But there it is. My kids' names will make sense together! It's pretty easy to say that when this is the first child ...

We used an app that seemed to have the best database of baby names and a decent interface. We both decided to limit the pool of names by origin to our own heritages (Swedish/Norse and Gaelic) and Biblical languages (Hebrew and Greek). We went through all the names in this massive list together and picked any that interested us to go on our list of favorites. This first step probably took 50-75% of the entire process.

We went through our list of favorites and eliminated all but one of any names that were of the same origin and meaning but had slightly different spellings. One "n" or two; that kind of thing.

We were finding it very difficult to take the next step after we had our master list of names. Neither the app we chose for brainstorming nor any other apps that we could find had the ability to put a list of favorite names into a table so that we could compare their various attributes easily. This seems like the perfect job for a spreadsheet, but alas, I did not have my laptop and couldn't use "an approved portable electronic device" because we were sitting on a plane during a 2 hour delayed takeoff. So we old-schooled it (shudder) and actually used the back of our printed boarding passes to proceed. We picked our favorite sounding version of all the names that had the same or similar meanings. At this point we were down to 42 names.

I cannot stress enough how important putting down ratings for each name was for this process. It saved us from endless 'I like this but you don't' exchanges. It eliminated more options more quickly than any other step of this process. Unfortunately, the app we chose to use did not have a name rating mechanism beyond just putting names on the favorites list. Other baby naming apps did have a 1-5 star rating mechanism, but a) we didn't want to transfer all of the names into another app, b) 1-5 is unnecessarily complicated in this situation, and c) there was no way to add multiple peoples' ratings. It's true that all of these deficiencies could be overcome, but we were far enough along that we just continued to use good ol' paper instead.

A 1-3 rating from each of us was ideal in this situation. 1 = meh, 2 = likey, 3 = really likey. This system allowed us to see plainly where we really agreed, sort of agreed, and totally didn't agree. We initially eliminated any name that did not have a cumulative rating of 4+, but then we went ahead and eliminated the 4s as well. We did allow retroactive changing of ratings after we saw each others' ratings in case we changed our mind about a name in order to save or kill it. I ended up saving Amara by changing my rating from 2 to 3 because even though I wasn't crazy about how it sounded, I really liked the meaning. We were now down to 15. 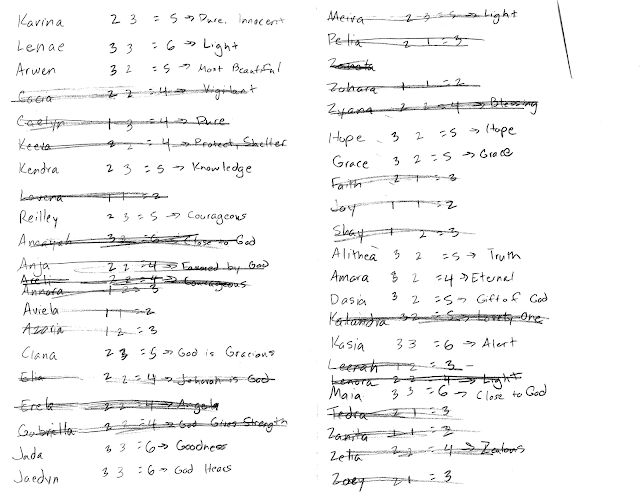 We decided that we wanted the baby's name to be pretty unique, so we gave each one a uniqueness rating. This didn't really change too much as we had been screening our initial list with this in mind. I understand the desire to not give a child a name that is so unique that nobody can spell it, nobody can pronounce it, etc. But we also didn't want to give our child a name that would be so common that she'd likely meet many other people with her same name, get confused with another person, etc. Besides, all the names in our list up to this point weren't particularly hard to pronounce or spell.

Our list was still too long at this point. Bring on the hippy dippy stuff. I finally caved on Kyla's dislike of a common English word for a name, so we eliminated Hope and Grace. We both really like Arwen but decided that the connection with The Lord of the Rings and the timing of its theatrical releases would probably make people think that that's where we got the name from. It may be stupid, but I don't want people to think that. We also took one last opportunity to veto any names that one of us just wasn't feeling. We eliminated Jada because it was very close to Jaedyn, and we decided we liked the way the latter sounded and its meaning more. And then there were 7. 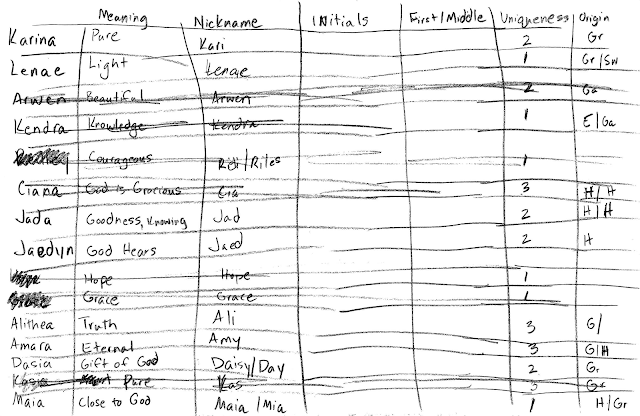 With our list of 7 in hand, we were ready to start thinking about name combinations. We wrote out all the first name and middle name permutations. We eliminated any combination that didn't sound right, which were mostly those whose first name ended with the same letter as the middle name started with. 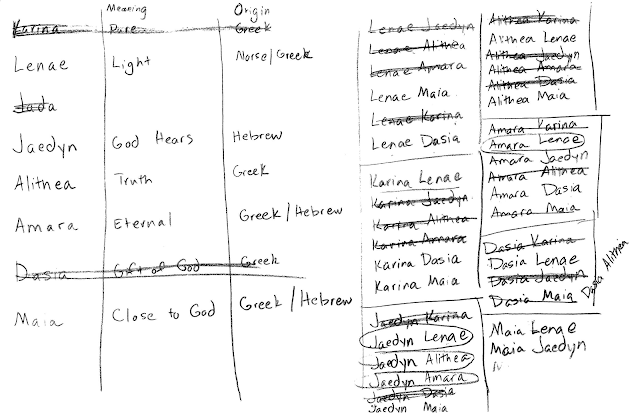 None of the resultant initials from the previous step were undesirable, so no dice on this one. Undesirable initials would include COC, CUC, DIC, FUC, GUC, HIC, KUC, MUC, NUC, PUC, RAC, SAC, SIC, SUC, and WAC. 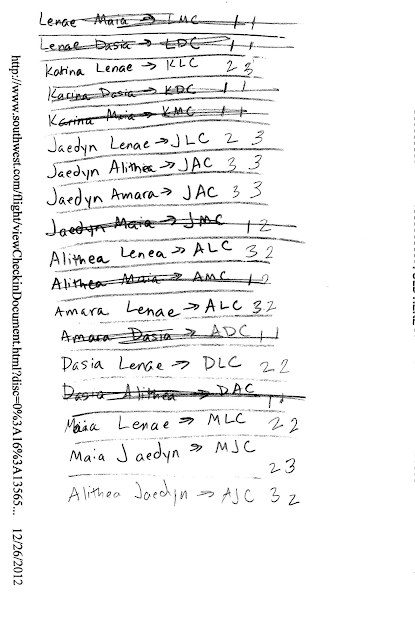 Next we wrote out the meanings next to each remaining combination. We went through another round of 1-3 ratings and eliminated those with lower combined ratings, leaving just 3. One of the combined meanings didn't make much sense even though it was Kyla's favorite initially. We finally settled on Jaedyn Amara because it has a pretty sweet meaning. We know that the male variation, Jayden, is a fairly popular boy's name nowadays (darn you Will Smith!), but this name has enough going for it in our minds to compensate. Besides, we can always call her Jade for short. 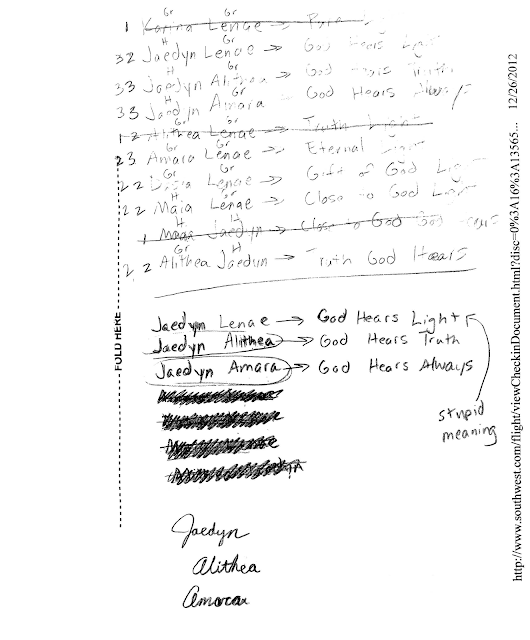 I scanned in all our scribblings for posterity and because we'll probably want to revisit some of these options if and when we have another girl. The name fits one of the themes I preferred: the combination roughly fits the roadmap of our spiritual heritage from Hebrew (Old Testament) to Greek (New Testament) to Swedish (Evangelical Free Church), and I think that's pretty cool. That theme should also give us enough options for the future should we have or adopt any more children.
Posted by Jake Carlson at 5:38 PM 4 comments:

We found out we're having a girl! Just what Kyla and her mother were secretly wishing for. Registries for anyone inclined: Babies 'R' Us and Target.
Posted by Jake Carlson at 7:30 PM No comments:

Everything looked "perfect" according to the sonogram technician. The baby seems to be developing on schedule. All genetic screening tests came back negative. 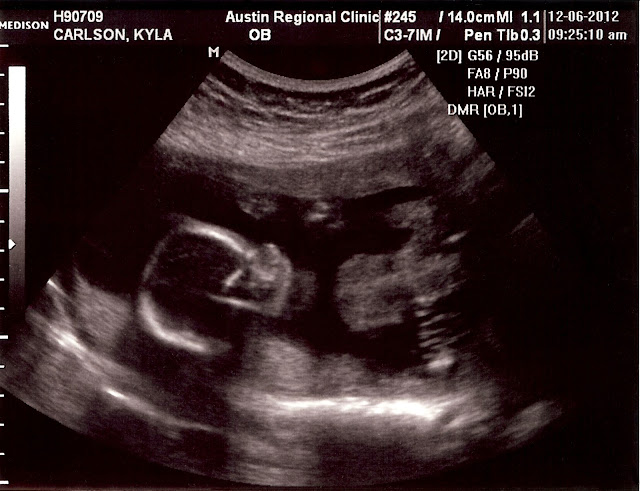 Posted by Jake Carlson at 3:00 PM No comments: